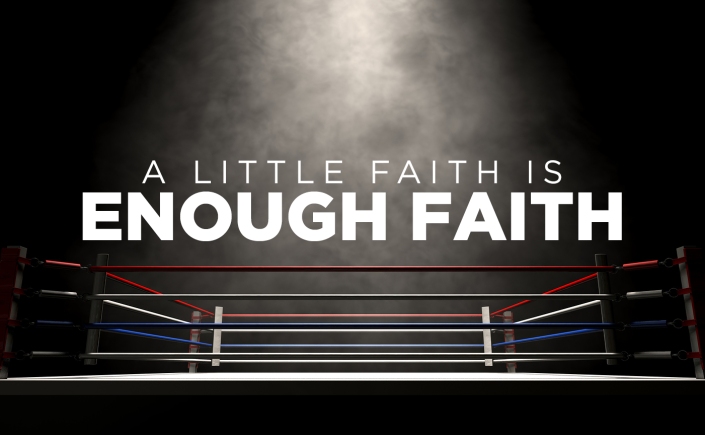 If your faith has never been body-slammed, I doubt you’ve been a Christian long. But my guess is you probably know what it feels like to be gasping for air while lying face first in the ring.

I used to dread those days and, like some rookie boxer, tried desperately to dodge them. But no matter how much I ducked, life consistently found a way to jab the air out of my rib cage and send me to the mat. I would proceed to heap shame on my already fatigued body:

“Christians over the centuries suffered far worse, you little baby. Get over it.”

The fact that it was (partly) true didn’t stop the spasms in my lungs or the ringing in my ears. Condemnation rarely does. What eventually gave me hope in those moments was the response of Jesus to His weak-faithed disciples in Luke 17.

It would seem to me that if anyone had reasons to believe the things Jesus said, it would be His disciples.  Healing blind people is pretty convincing in my book. Yet there they were fighting with doubt – boxing and wrestling their way through most of Palestine. Finally, one day…

The apostles said to the Lord, “Increase our faith!” And the Lord said, “If you had faith like a grain of mustard seed, you could say to this mulberry tree, ‘Be uprooted and planted in the sea,’ and it would obey you.” Luke 17:5-6

Now, from my understanding of the Gospel accounts, Jesus was never (ever) hesitant about rebuking unbelief in the people of Israel, but something different happens here. If this was a rebuke at all, the tone was shockingly soft. The apostles were quite aware of their lack of faith (that’s why they asked for more).

Jesus didn’t face palm Himself like I would have. Remember, He fed a stadium’s worth of people with a Happy Meal’s worth of food, and it wasn’t even the coolest miracle He did. How much more evidence did those guys need?

But, then again, I’ve heard stories of miraculous healings in my lifetime. I’ve lived in moments that could not be explained apart from the providence of God, and, like the apostles, can still get blindsided with unbelief in times of weakness or tribulation. The difference now is that I can hear the voice of Jesus as He picks me up, pops my shoulder back in place, and repeats Luke 17, “A little faith is enough faith.”  And I keep walking forward.

There were people who saw mind-blowing things, but walked away from Him entirely. So, what separated those guys from Peter, James, and John?  The apostles had faith. Sometimes it was itty-bitty, wimpy-looking faith, but it was enough.

After the deserters took off, Jesus looked at the twelve and asked, “Do you want to leave too?” Then Peter replied something that I have quoted many times as I stumbled back to my feet,

“Lord, where else are we going to go? You have the words of eternal life, and we have believed, and have come to know, that you are the Holy One of God.” John 6:68-69

Life can dislocate your jaw and send you spinning to the mat some weeks. Peter knew the taste of that floor well. He also had little faith in those days, but a little faith was enough.

One thought on “A Little Faith is Enough Faith”