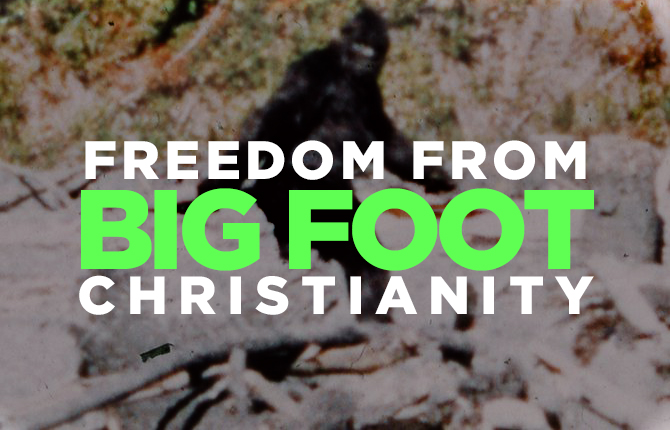 While you’re trying to roll out of bed at 6:30, they’ve been up since 4:00 doing pull-ups in their prayer closets and reciting Psalm 119 in perfect Hebrew. Those sparkly, brilliant, mega-Christians. Don’t they make you feel so small?

The good news is they’re not real.

It’s a conspiracy theory. Big Foot Christianity – the belief that super Christians exists (although no one has seen one in real life). At times, we think every semi-mature Christian is really Big Foot in disguise, but they’re not. They’re just Christians. Faithful and growing and saved-by-grace Christians.

Conspiracy theories and fuzzy pictures of Big Foot breed all sorts of icky stuff in our heads. So let’s confront the theory with reality.

Stop trying to impress Big Foot. I have to remember this every day (even right now). Writing feels a little vulnerable at times and I’d rather not screw it up. There are two options I have when sitting down to write it for you:

My default is #1. I have to choose to believe #2, and sometimes the transition is tough. It helps to have clear pictures to replace those fuzzy ones. This Scripture does it for me:

Everything we have is a gift. You did not change your own diapers or pay rent in Kindergarten. You weren’t saved in a vacuum either. At some point, a man or woman was brave enough to share the gospel with you. Then somebody else (or more likely several people) showed you truths about Christianity and life and leadership.

Anything valuable you give to others is the result of what you’ve been given. And the wisest, godliest people you know are the products of what they’ve been given. There are no self-made, super Christians.

One thought on “Freedom from Big Foot Christianity”