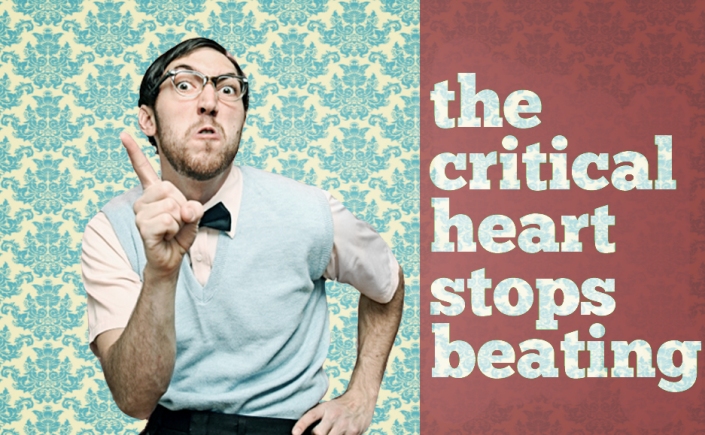 Cranky three-year-olds have a lot in common with critical people. If you’ve ever tried to reason with a tired child, it’s always frustrating and sometimes hilarious. Nothing makes anything better.

Also, anything makes everything worse.

It’s because the issue causing all the ruckus is never the real problem. He’s not mad because his rocket ship was left in the living room. He’s mad because he’s tired and his sinful flesh is on full display. The rocket ship just happens to be the focus of his fussing at the moment. When you bring him the toy, he’ll shift his fussing to something else.

Matthew 11:16-19
And Jesus said, “But to what shall I compare this generation? It is like children sitting in the marketplaces and calling to their playmates,

When Jesus was looking for a good description of the critical heart, he compared it to a bunch of fussy kids. Back in those days, young children would play wedding or funeral in the marketplace. When the kids would play wedding, they pretended to perform music and danced while the “bride and groom” said their vows. Everyone was invited.

But the fussy kids didn’t want to play that game. All they wanted to do was stew in a huff.

So, the others changed the game to funeral (a little morbid, but it was what they knew). Well, the fussy kids didn’t want to play that game, either. These religious people, with their critical hearts, were acting the same way.

Jesus revealed that this was not about him or John the Baptist. It was a heart issue. Their hearts were weary, heavy laden, and on full display. So, Jesus offered rest for their souls, but they got critical instead; making it seem like this was someone else’s fault. In short, they missed the gospel.

This can happen to all of us. If I get critical (like when I see everything else around me as the problem), then I am in the most need of rest in Christ. The answer is almost never found in what I’m criticizing anyway. You can solve that “problem” and I’ll find another one to cast my cares upon. A critical heart is nothing more than the reflection of a weary soul.

In those moments, choose your next step carefully. Instead of growing cynical, embrace being led beside still waters and take the light yoke of a burden-carrying Savior (Psalm 23, Matthew 11:29).

Then go play with the other kids.