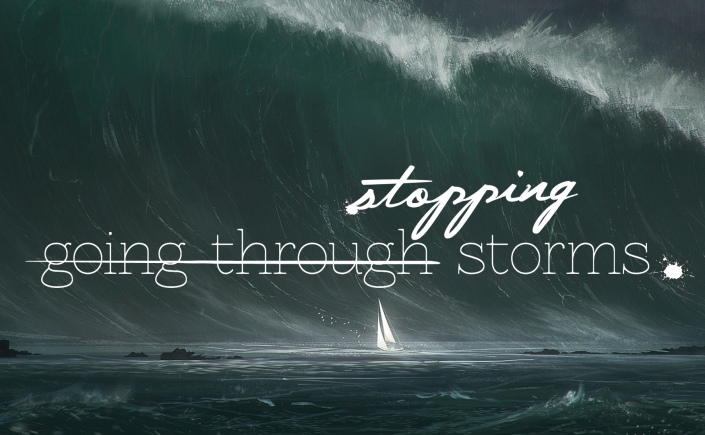 Defective little adages can get passed around like a cold, and they tend to stick around for a while. This one infected me quick:

“You’re either in a storm (difficult circumstance), coming out of a storm, or about to go through one.”

For too long, I let that statement be the filter for life. It wasn’t until much later that I figured out its two biggest problems:

My life was the perfect host for that lingering cold. At five, my parents were divorced. It affected me more than almost any other season of my life. (I’ve written about how Christ redeemed it, and how He gives hope to blended families in a free eBook available here).

As soon as I felt like things were getting normal, an X-Ray revealed what was causing my excruciating headaches. Tumors had filled my sinuses and eyes. I was ten, and spent the next six years going through nine surgeries and many rounds of chemotherapy. Just moving from one storm to another, right?

The worst part was not the fear of tumors moving into my brain or the side effects of chemotherapy, but the kids who were battling life-threatening cancers in the Oncology clinic. Every Wednesday we would sit together waiting for our blood work to come back.

I knew their names. We played Donkey Kong. Each week the same thought rolled over and over as we waited: “Your storm is bad, Blake. But theirs is worse.”

That was what crushed me.  Knowing it could be worse.  Knowing that, as awful as this was, more suffering might await. Fear rose as I wondered what other storms were boiling ahead.

By eighteen, my disease was in remission. The calm made me nervous.

Three months later, I walked passed the coroner at our front door. Mom said what I had already figured out on the drive home, “Dale died.”  He was my stepdad, and I loved him very much. My world stopped for a while. Another storm.

But I knew it could be worse. It can always be worse. That was my life – the storms.

This way of thinking is a virus. A cold that will kill you. It stole my joy for nearly 20 years. And today, as a survivor, I can diagnose the symptoms of it quickly in people:

Thank God for Jesus. Watch closely to what He did,

Luke 8:23-25
So they set out, and as they sailed he [Jesus] fell asleep. And a windstorm came down on the lake, and they were filling with water and were in danger.  And they went and woke him, saying, “Master, Master, we are perishing!” And he awoke and rebuked the wind and the raging waves, and they ceased, and there was a calm. He said to them, “Where is your faith?” And they were afraid, and they marveled, saying to one another, “Who then is this, that he commands even winds and water, and they obey him?”

Turbulent water represented chaos to everyone in the ancient world. So, by calming the waves, Jesus was doing much more than trying to get back to His nap.  Christ was showing that He had authority over the chaos. The storm bowed its knee to Him.

Even the winds and water obey.

The Gospel is that Jesus Christ brings peace in the midst of your storm. He looks into the raging waters of your fear and pain and despair, stands to His feet, and says, “Be still.”

That’s what He did for me.

Of course there were more storms – miscarriages, nights in ICU with our son and so on. Jesus never promised we wouldn’t have moments that were hard. Instead, He showed that He was in control (and why that was a good thing).  The storms bowed their knee.

So, if life is NOT peaceful right now…

If life IS peaceful right now…

If your peace is determined by circumstances, then you’ve caught the cold and will live in fear. Please don’t. In Jesus’ name, be healed of that virus.

Let Him look into your eyes today and say, “Be still.”

One thought on “Stopping Storms”